We stayed with Soliel & her daughter Bambou in Sant Denis, Paris. It was the perfect, quiet room for us to sleep off jet lag. Our first night in Paris we took the metro to the best overlook of the city, the church high on the hill known as Sacre Coeur. We enjoyed a goat cheese salad and crepes behind the church in a small square full of art vendors and pubs. On our way back down we entered Sacre Coeur and enjoyed the reverence of the magnificent church, a nice solace from the vendors and con-men on the hill. Jon took a spot in front of the alter and it looked like he was praying and just resting. I toured the candle-lit enclaves. After some time I joined him and right at that moment a group of nuns, dressed in pristine white habits stepped onto the alter and began to sing in four-part harmonies. We followed along in the liturgy provided on the pews. There was this Indescribably connection between us and the worshippers, language made no barrier. The songs filled the massive ceiling of the church creating, bouncing off the walls and surrounding us with peace. We walked home silent and content. 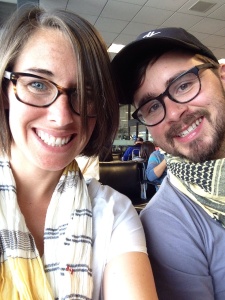 We made it on the flight to Paris, France! Missing last night’s flight turned out to be perfect! Our friend Sam was working at the airport and when we didn’t make the flight he offered a ride and a night stay at his home in Park City. After an awesome dinner together & 12 hours of sleep we feel great. Paris here we come!!